On Feb. 17, the Eustis Elks Lodge’s Americanism Committee recognized the Officers of the Year from police and fire departments of Mount Dora, Eustis, Tavares, Leesburg, Umatilla and Howey-in-the-Hills. Officers were also recognized from the Lake County Sheriff’s Office, Lake County Fire Department and the Florida Highway Patrol. Also honored were the K-9 officers and their K-9s from Eustis, Leesburg and the Lake County Sheriff's Office. Dinner was served to all officers, spouses and the chief of each department. Each department was given a plaque to be placed at their departments. Each officer received a framed certificate of achievement from the lodge. Each chief explained why their officers were chosen for their recognition by their peers. The keynote speaker for this annual event was Michael J. Saxe, retired detective from New York City and a 9/11 first responder. He is also a member of the Ocala Elks Lodge. The Table of Honor was performed by the Mount Dora High School Jr. Air Force ROTC. Lodge member Lt. Chad Williamson of the Eustis Fire Department was chosen as that department's Officer of the Year. 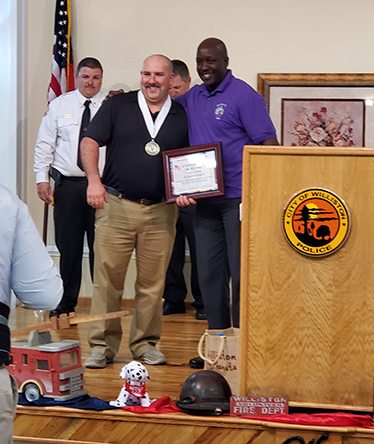 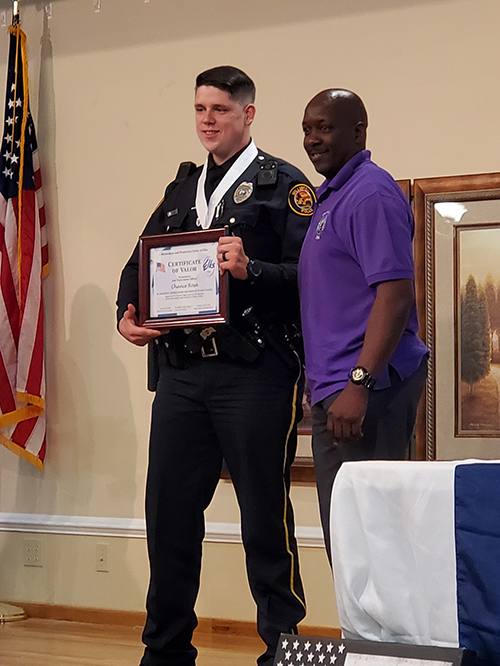 On March 13, Ocala Elks Lodge #286 presented the Elks medal to two first responders – Firefighter R. Grajek of the Williston Fire Department and Police Officer C. Rosa of the Williston Police Department – for their dedication to the community and for going above and beyond the call of duty. Exalted Ruler-elect, Mike Rolls, presents the awards to Firefighter Grajek (left) and Officer Rosa (right). 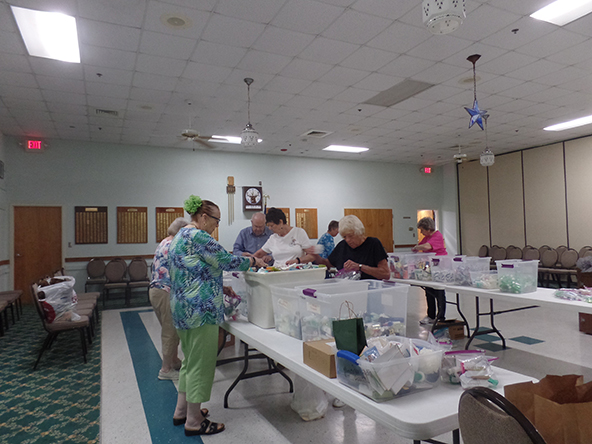 Once again, Elks and Anna Miller Circle members met at Eustis Elks Lodge #1578 March 16 to pack welcome kits for The Haven of Lake and Sumter Counties. The donation included 340 adult welcome kits (travel-size soap, shampoo, conditioner, moisturizer, toothbrush, toothpaste, mouthwash and deodorant) and 100 children's welcome kits (soap, toothbrush, toothpaste, hand sanitizer, lip balm, shampoo, a small toy and other items). Also included were 11 birthday kits (cake mix, frosting and candles) for children who celebrate their birthday at the shelter. Other items included food, children's clothes and toys. The total contribution was valued at $4,545.50. The Haven of Lake and Sumter Counties is a shelter for women, teens and children who have been abused and who find themselves with no place to go during a difficult time. The Haven offers many services to help women and their children on the road to a safer and healthier life and the Eustis Elks and Anna Miller Circle are proud to be in the fight with them. Pictured packing kits are Stanley and Sherry Piskadlo, co-chairs of The Haven project; Joyce Collier, president of the Anna Miller Circle; Bonnie Smith; Judith Polson; Mary Ann Cerney; and Anna Mitchell. Suzanne Cunningham, co-chair of The Haven project, takes the picture. 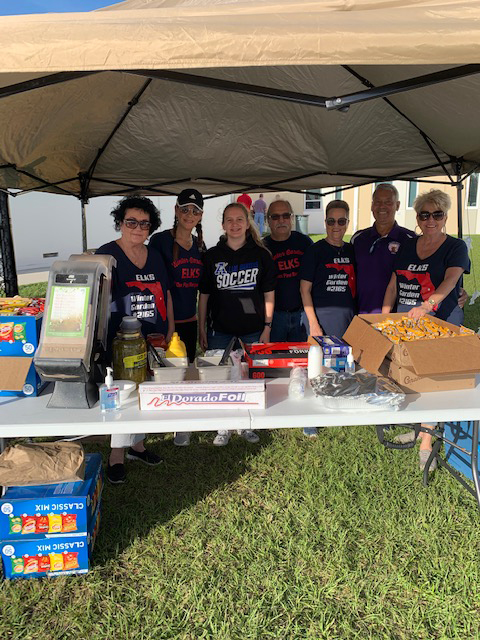 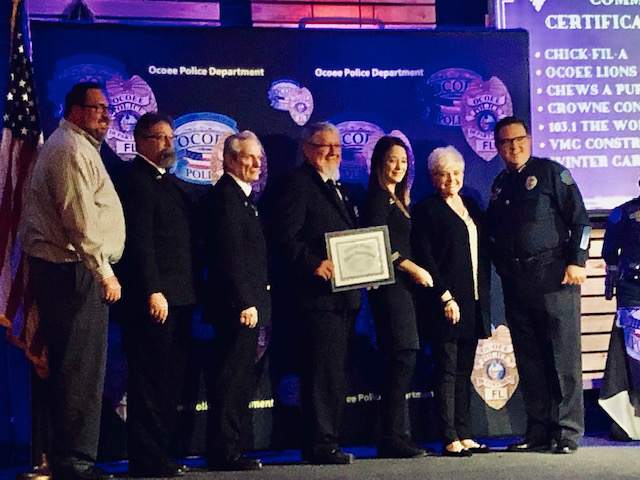 The Ocoee Police Department recognized Winter Garden Lodge Jan. 31 for their outstanding contributions as a community partner. The lodge held a baby shower for 25 mothers with low incomes, providing diapers, wipes and other baby necessities. They also held a fundraiser and raised $10,000 for a young man battling cancer. Another of their fundraisers raised $10,000 for an Ocoee man’s medical bills after a hunting accident. Receiving the award are Wally Hatch; Joe Snyder; Bob Warren, PDD; Frank Severance, PER; Cheri Doyno, and Pam DePriest along with Chief of Police, Charles Brown.

Winter Park Lodge Exalted Ruler, Ron Goluba, and member Sue Jovi were once again invited to play Santa and Mrs. Claus for the children of over 300 families in need at the annual HOPE Christmas in the City event. HOPE Helps Inc. is is a local charity whose mission is to prevent and reduce homelessness in central Florida by helping individuals and families become self-sufficient through housing, outreach, prevention and education. 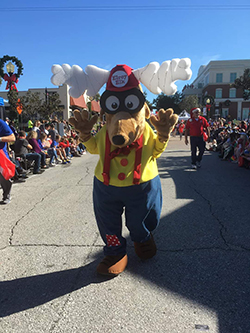 South Lake Elks Lodge #1848 kicked off their Christmas for Kids program with Elroy the Elk and his helpers marching in the downtown Clermont Christmas parade on Main Street Dec. 7. Over 1,200 drug-free red ribbons were passed out. That evening, residents of Clermont enjoyed the Elks Christmas for Kids boat parade with over 80 boats participating. All money raised went to help over 250 children in the community.

Eustis Lodge received a $2,000 Elks National Foundation Spotlight Grant that was used to sponsor the first Dolly Parton Imagination Library in Lake County, Fla. The goal of the library is to provide books for reading to preschoolers (infants up to five years old) at Eustis Ridge Elementary School. 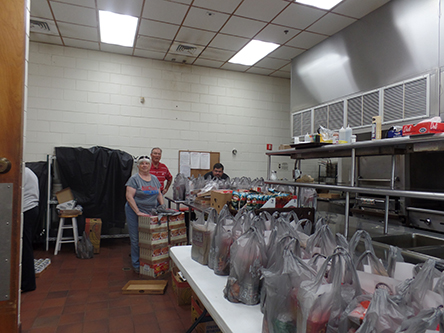 Eustis Lodge members Bill Hall, Ron Locke and TJ Platt smoked 197 turkeys the week before Thanksgiving and packaged them along with groceries to make a complete dinner and delivered the meals to 11 elementary schools for families in need Nov. 22. Charity funds from lodge fundraisers made this possible. Pictured are members Bill Hall and Adam Dufresne and Fufresne’s mother. Nancy Massingale and Sharon Myers also helped pack the meals. 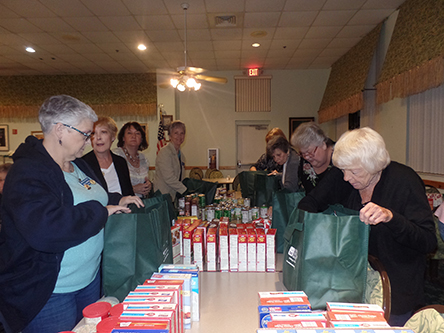 On Nov. 21 at the Eustis Anna Miller Circle meeting, members packed 25 Thanksgiving dinner packages to be delivered Nov. 22 to Triangle Elementary School with 25 smoked turkeys that the Elks smoked for them. The ladies also sent additional food that was collected for these families. The ladies also used their charity fundraising funds for this project. Packing the dinners are Jean Campbell, Rita Manley, Kathy Mitchell, Carolyn Small, Anna Boykin, Shearon Jones and Bonnie Scott. 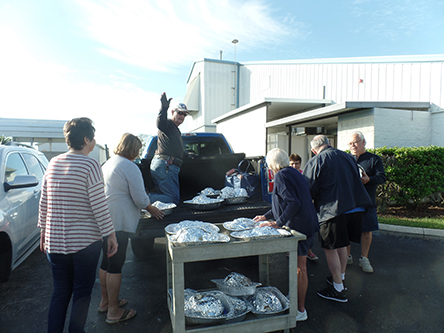 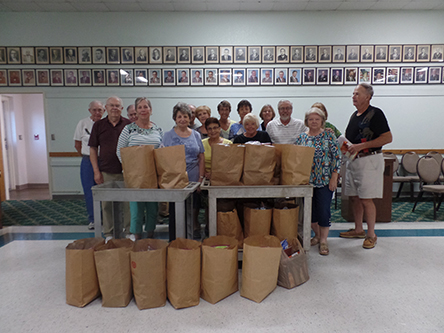 On Oct. 14, six Elks and 10 Anna Miller volunteers met at Eustis Elks Lodge #1578 to pack a donation totaling $5,001.29 worth of in-kind gifts to The Haven of Lake and Sumter Counties. The donation included 350 adult/teen welcome kits, 118 children's welcome kits, 14 birthday kits (cake mix, frosting and candles for children who celebrate their birthday at the shelter), 15 stuffed toys, baby dolls, 87 full-sized toiletries, and children's clothes. Adult/teen welcome kits are one quart-sized bag bags containing soap, shampoo, conditioner, toothbrush, toothpaste, mouthwash, deodorant and a disposable shaver. Children’s kits also include hand sanitizer, a handheld toy, lip balm and various items for children. The kits are given to each person as they arrive at the shelter to make them feel special. The Haven of Lake and Sumter Counties is a safe house for women, teens and children who have been abused as well as survivors of rape. The Haven offers many services to women and their children to help them on the road to a new safe and healthy life. 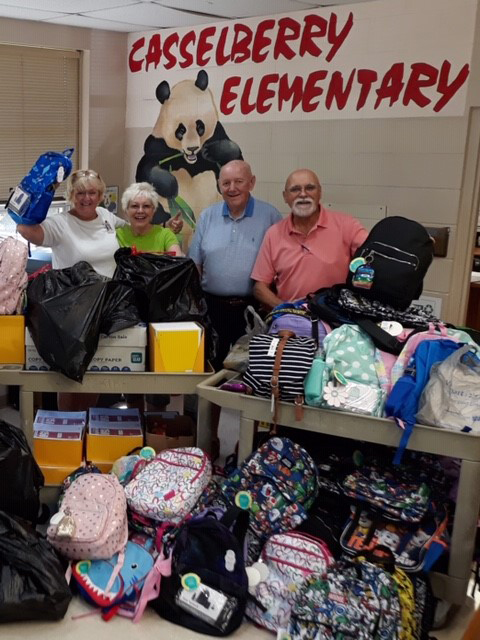 Inverness Elks Lodge #2522 used an Elks National Foundation grant in August when their volunteers met to pack 170 backpacks for their Backpacks for Success program which is in its sixth year. They not only supply backpacks for children in foster care but they also deliver them to five other area schools so that children in the community are well prepared for their first day of school.