On Oct. 22, Fort Walton Elks Lodge #1795 presented Florida Elks State President, Danny Tabor, with two checks for the Harry-Anna Trust Fund in the amount of $908 each. One was for the Harry-Anna Trust Fund general fund and one was earmarked for the Northwest Florida Elks Children’s Therapy Services (FECTS) district therapist, Elizabeth Mania, for equipment, gear and tools to conduct therapy with the assigned therapy clients. Funds totaling $1,816 were raised at the lodge’s first and very successful Oktoberfest Sept. 24. 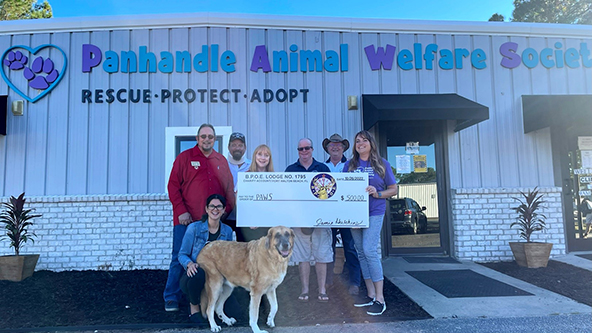 On Oct. 26, Fort Walton Elks Lodge #1795 presented the Panhandle Animal Welfare Society (PAWS) with a check for $500 to use for making major changes both internally and externally to improve operations and general animal welfare and to increase community services. The donation has gone toward construction improvement projects, including adding power lines throughout the facility and providing needed safety lighting and increased air conditioning to all canine-occupied kennels. A major renovation is underway to tear down and replace the canine kennels on the campus that have been worn and torn over the decades-long tenure and thousands of animals housed. The Okaloosa County PAWS has taken in more than 2,000 lost, abandoned, abused and neglected pets in 2022. Of these, 281 of those dogs and cats were reunited with their owners. There have been 1,024 dogs and cats re-homed to responsible pet owners through the PAWS adoption program. Okaloosa County also has a large number of PAWS rescue partners who took in more than 450 pets to be adopted through their programs which allows for the additional space at PAWS to save more lives. 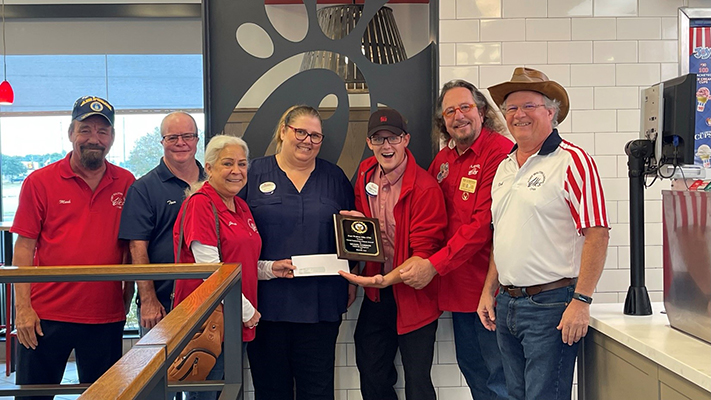 Fort Walton Elks Lodge #1795 presented a Good Smartian Citizen Award Oct. 28 to Mykel Gordon, a Chick-fil-A employee who rescued a mother and her baby from an attempted carjacking in the drive-thru line at the restaurant in Fort Walton Beach, Florida. When Gordon heard the woman scream and saw the man had taken the woman’s keys, he rushed toward the assailant and tackled him to the ground, placing him in a headlock and holding on until law enforcement could respond. Gordon prevented the carjacker from hurting the woman and her baby after he had threatened them with a stick. The lodge, in support of the community, recognized Mykel Gordon for his heroic act with a plaque. This particular Chick-fil-A was already nationally recognized a couple of months earlier for being Chick-fil-A’s best drive-thru in America. 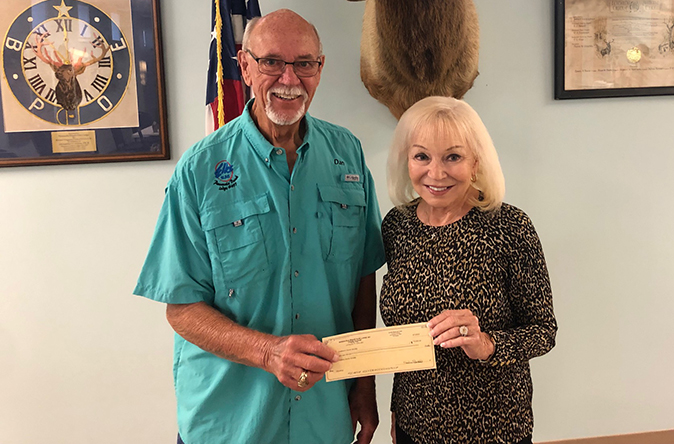 Pensacola Beach Elks Lodge #497 made a $5,000 donation from its charity account to the Children's Home Society Oct. 6. The Society provides family counseling and adoptive services and is located in Pensacola, Florida. 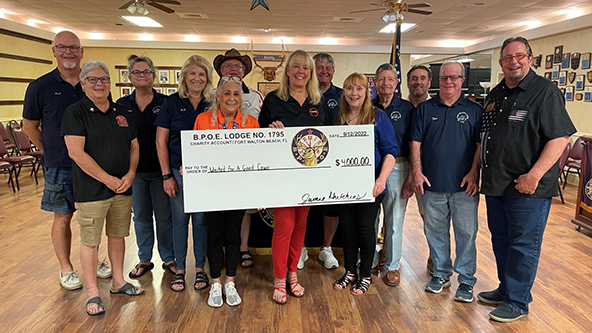 Fort Walton Lodge partnered with United for a Good Cause Sept. 12 to support the Hope Squad in the county school system with the presentation of the $4,000 Elks National Foundation Beacon Grant. Hope Squad is a peer-to-peer suicide prevention program in schools. Okaloosa County has been in the top 10 Florida counties for youth suicide for many years. Most often a youth will reach out to a peer before an adult if they are thinking about suicide. Youth suicide is increasing in the country and the lodge wants to help address the mental issues students struggle with in today's environment. There are currently 15 out of 20 secondary schools in Okaloosa County with Hope Squads. The program needs to be expanded to all 20 schools. One of the suicides in the county last year was a fourth grader. 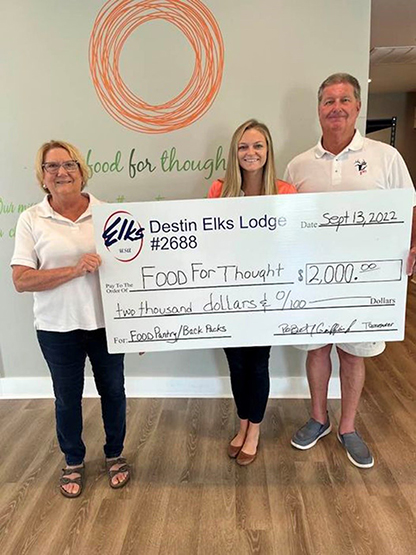 On Sept. 13, Destin Lodge presented $2,000 from the Elks National Foundation Spotlight Grant to Food for Thought of Destin, Florida. They assist in providing food to many children through their backpack program at local schools. The Food for Thought mission is to provide outreach in the community to bridge the meal gap in the lives of food-insecure children and empower them to get the most out of their education. They understand that students coming to school after missing multiple meals do not learn or develop at the same rate as their peers. The goal is to provide year-round services to take the fear, stress and illness related to childhood hunger away from students from kindergarten to 12th grade. They provide weekly access to healthy, easy-to-prepare meals. 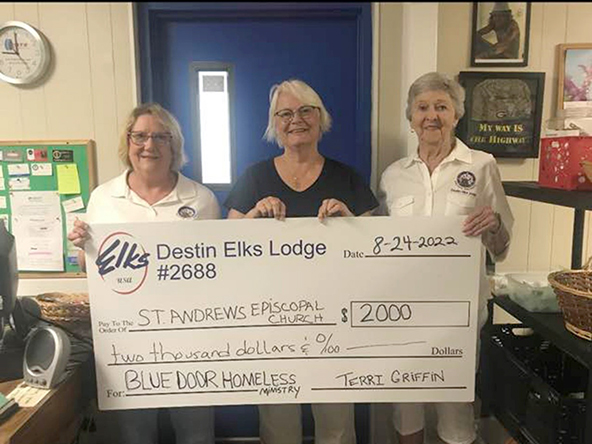 Destin Lodge presented $2,000, the remainder of its Elks National Foundation Gratitude Grant, to the Blue Door Homeless Ministry of Destin Aug. 24. The ministry was so grateful for this much-needed gift. They support those experiencing homelessness on a daily basis by providing showers, clothes, shoes, bag lunches and other services. This ministry also operates a food pantry that provides hot meals several times a week. This money will be used to keep the pantry stocked and to purchase necessary supplies such as personal care products. 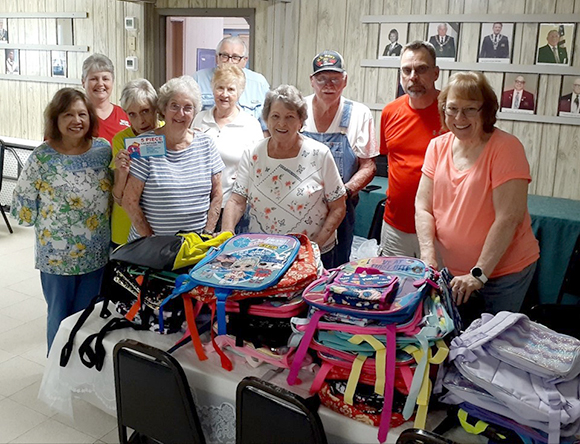 Using the Elks National Foundation Beacon Grant and under the guidance of Caroleen Swanson and Tammy Kuhn, project officers, Twin Cities Elks Lodge #2747 conducted the lodge’s eighth annual Backpacks and School Supplies for Kids initiative July 30 and Aug. 4. In cooperation with The United Way’s Sharing and Caring of Okaloosa County, the lodge purchased and donated 103 backpacks valued at $2,035 and $2,000 in school supplies to returning students in the Niceville and Valparaiso community. This program provides much-needed school supplies to local students and their families needing assistance defraying back-to-school expenses. Distribution was made at the lodge and the Sharing and Caring facility in Niceville. The students showed so much appreciation. 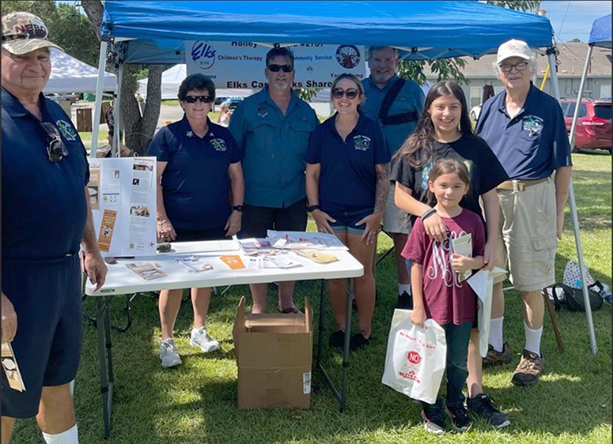 Holley-Navarre Elks Lodge #2787’s Drug Awareness Committee was at the outdoor market at Pik-itz, an art and antique shop of Navarre, Florida, Aug. 20 displaying information and giving brochures about the Elks Drug Awareness program, the Elks National Foundation Most Valued Student Scholarship and Florida Elks Children’s Therapy Services. If a family had children with them, a bag with similar information was provided for parents along with a coloring book, crayons, pencil and drug-free Red Ribbon for each child. What makes a weekend like this special is knowing that drug use touches almost everyone’s life or family, and lodge members provided a listening presence to hear their stories. The lodge is grateful to Terry Light, owner of Pik-itz, who provided the space for them to set up a canopy and provide information to the community. 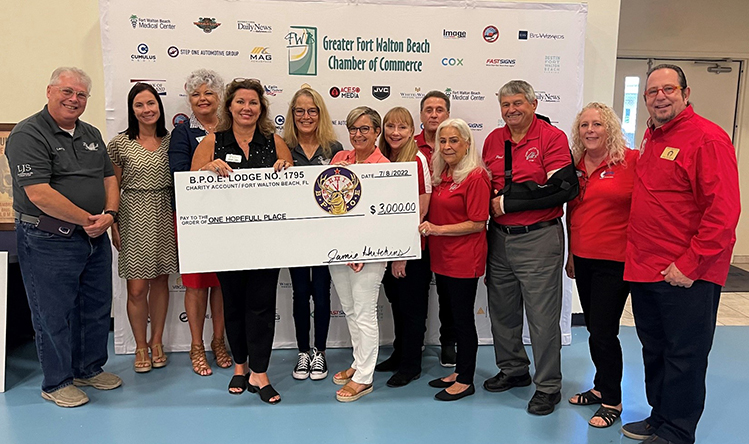 On July 8, Fort Walton Elks Lodge #1795 presented its $3,000 Elks National Foundation Gratitude Grant to One Hopeful Place at the Greater Fort Walton Beach Area Chamber of Commerce First Friday Coffee. There were approximately 300 business, community, church and school leaders in attendance during the presentation. The lodge will partner with One Hopeful Place, the primary shelter in the community serving unaccompanied individuals and veterans experiencing homelessness. They currently operate a 50-bed shelter for men and a 10-bed shelter for women. The community struggles with affordable housing issues due to high costs of both permanent housing and rental housing costs in the area. One Hopeful Place is the doorway into permanent housing and their mission is to help end the cycle of homelessness for those experiencing housing loss. 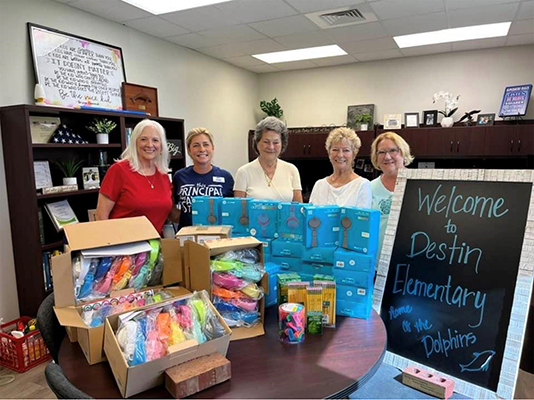 On Aug. 19, Destin Elks Lodge #2688 utilized $500 of its Elks National Foundation Gratitude Grant to purchase 31 sets of headphones for Destin Elementary School. Between Destin Lodge and American Legion Post 296 Destin Auxiliary, the school received more than 100 sets of headphones and a large supply of pencils. This was a joint project by both charitable organizations serving the Destin community. The school staff and teachers were thrilled and very thankful for the gift. 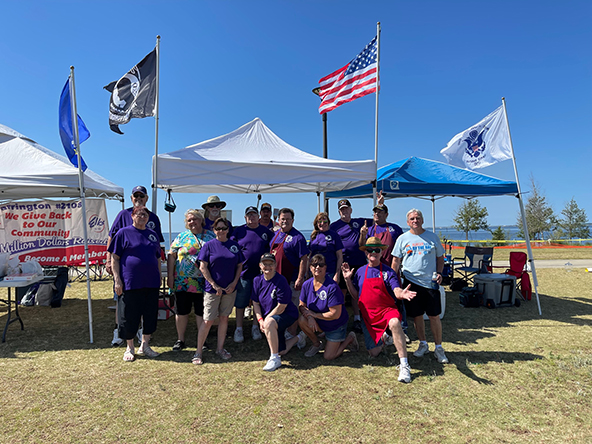 To improve the lodge’s visibility in the community and hopefully attract new members, Warrington Lodge had two cooking teams at the Rotary Burger Battle by the Bay 2022. Eighteen members spent the morning cooking burgers and handing out drug awareness materials to children in attendance. They also had the district drug awareness trailer on prominent display and members were “loud and proud” throughout the event. Over 1,000 members of the public had a chance to learn about the Elks and their work on behalf of children and veterans. Although they could only walk away with an honorary mention for their burgers, they were definitely proud to help raise more than $30,000 that will support children’s charities in the community, including Take Stock in Children, Gulf Coast Kid’s House and the Global Learning Academy.