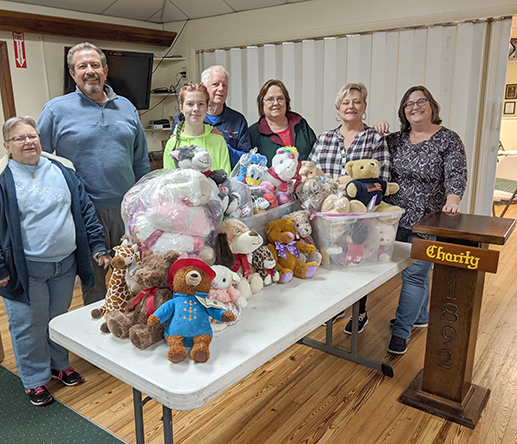 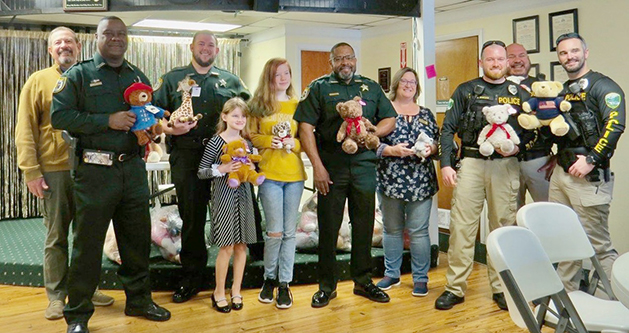 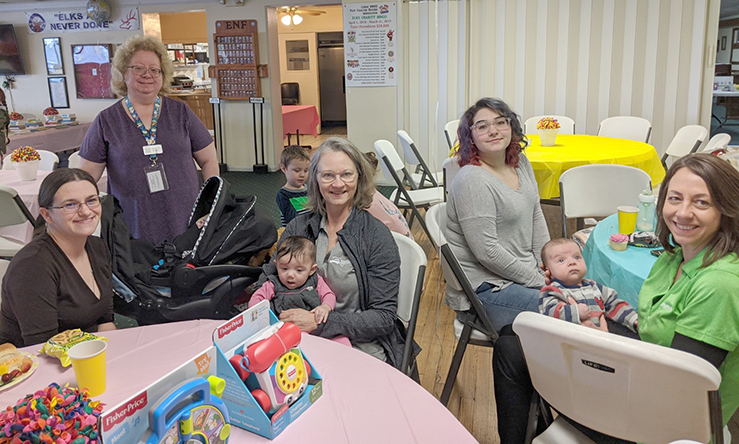 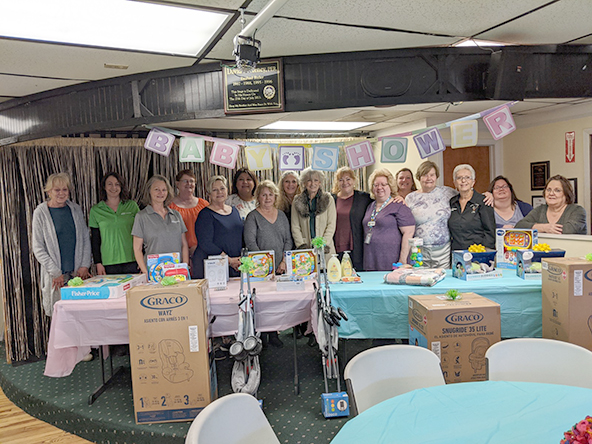 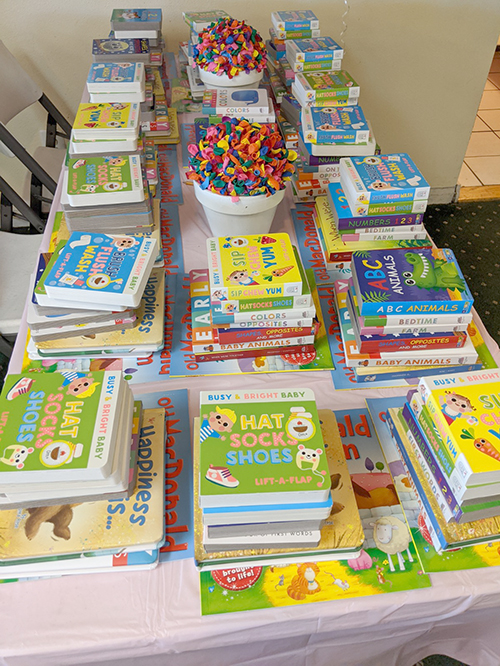 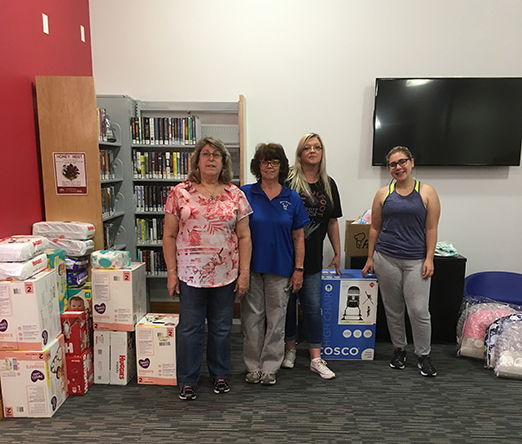 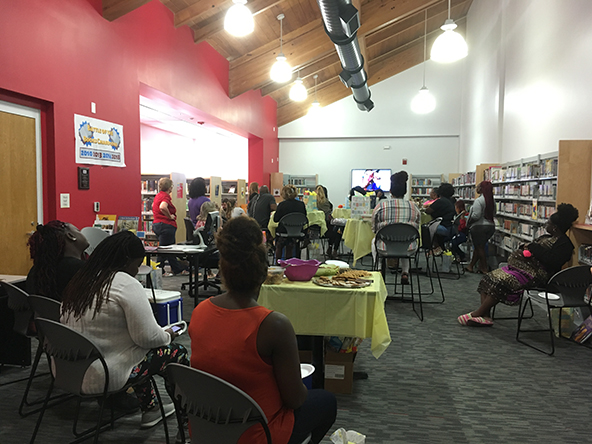 On March 3, Gainesville Elks Lodge, through partnership with the University of Florida’s Healthy Families Organization (HFO) and the Alachua County Library District and with the assistance of an Elks National Foundation Spotlight Grant, held a community baby shower. Young first-time parents and expectant mothers were invited to the event and were informed of a vast amount of programs and services that the Elks, HFO and the Library District offer. A literary program was conducted by HFO with attention drawn to the learning capabilities of unborn children and the importance of reading to children even before their birth was discussed. Elks members distributed over 350 board books to the over 25 families in attendance and held a raffle for a large quantity of baby items ranging from diapers to play yards and highchairs. The Elks distributed information on Florida Elks Children’s Therapy Services and Drug Awareness and assisted the library staff in providing library cards to the families. The families left with a copious amount of information to assist them in raising healthy children and promoting their children’s literacy skills and development. 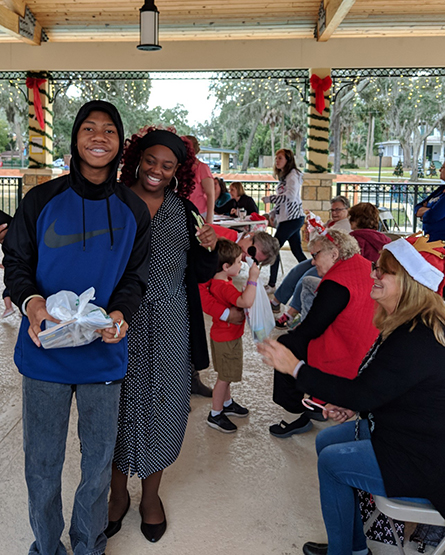 The Green Cove Springs lodge #1892 participated in the City of Green Cove Springs Christmas festivities.  On December 1st, 14 Elks and 8 helpers packed age appropriate gift bags for infants up to teens. Thanks to the generosity of the Lodge Members and PER Association,  on December 7th, 15 Elks and 10 helpers distributed bags to over 300 local children. 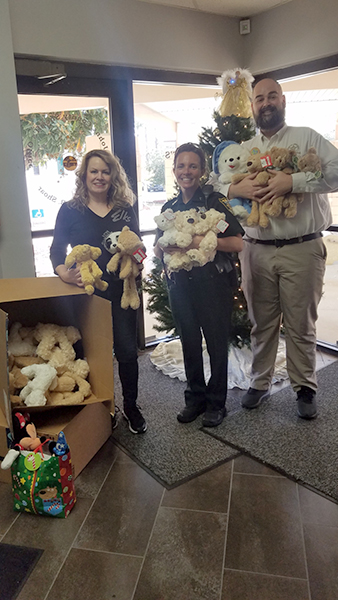 St. Augustine Elks Lodge #829 heard that the St. John’s Sheriff’s Department needed a donation of bears for its Cuddly Care program. Lodge member Cathy Walsh ordered the bears and took donations from lodge members as well. Leading Knight, Connie Sarnowski, delivered the 47 bears to the sheriff’s department. The mission of the program is to raise the spirits of patients at Flagler Hospital and local nursing homes and has been in existence for nearly 20 years. Many organizations, businesses and private citizens have generously contributed to this program by collecting hundreds of thousands of stuffed animals that have brought smiles to numerous patients’ faces. 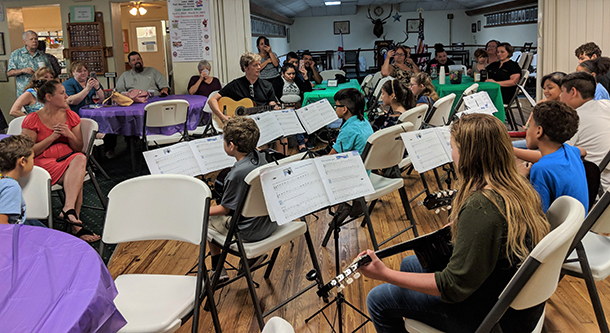 Green Cove Springs Elks Lodge #1892 utilized the Elks National Foundation Promise Grant to fund summer guitar lessons for local students. The lodge purchased materials for 10 students and hired a guitar instructor, Marty Farmer, who provided seven hour-long group lessons throughout the summer. Lunch was provided at each session. On July 24, the students performed a recital for approximately 70 Elks and family members and stayed as guests for dinner after the performance. 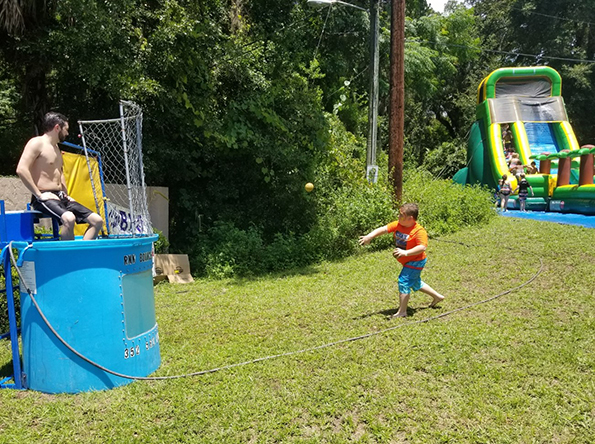 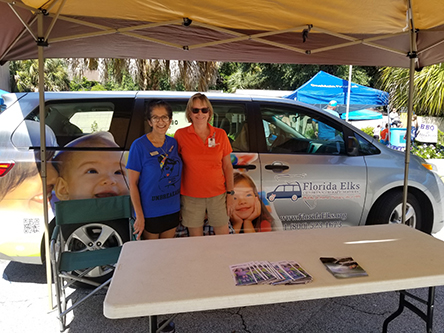 On June 20, Gainesville Elks Lodge #990 hosted its annual Splash Day to raise awareness for autism and to benefit the Center for Autism and Related Disabilities (CARD) which is associated with the University of Florida. There were 156 participants who attended the fun-filled and informative afternoon event. Using the Elks National Foundation Gratitude Grant and lodge donations, 33 volunteers, including Florida Elks therapist Val Edmands, helped raise awareness of CARD and its services.

Gainesville Lodge member Austin Roper takes a turn in the dunking booth as Dustin Klein tries to dunk him. Dustin’s father is member Jason Klein. Dustin brought his own money to donate at the dunking booth.

FECTS therapist Valerie Edmands was on hand to share information with families. She is pictured with Margie Garlin from CARD. 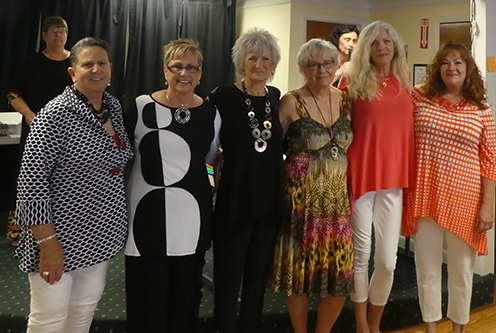 Green Cove Springs Lodge hosted the third Northeast District Florida Ladies of Elks (FLOE) fashion show May 6. FLOE Treasurer Linda Rittenhouse and 18 lodge volunteers modeled the casual wear, set up and decorated the lodge, and prepared and served the food to the delight of the show’s 81 attendees. Tiffany Ruff of RESORT FASHIONS presented the fashions for sale aided by six ladies from Green Cove Springs Lodge who modeled the casualwear. The show raised $1,581.46 for Florida Elks Children’s Therapy Services and the Florida Elks Youth Camp.

Details
Written by Gene Rittenhouse, PER 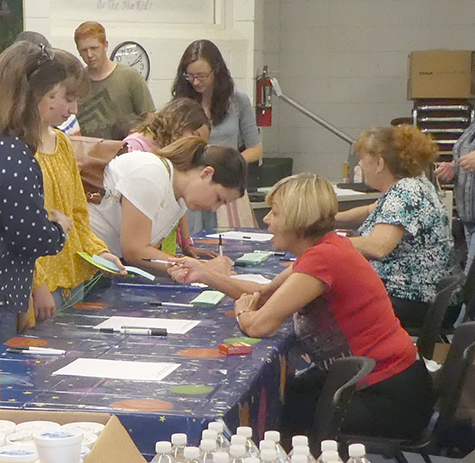 On June 4, Green Cove Springs Elks Lodge #1892 sponsored the summer kickoff for the Green Cove Springs Public Library. This was the lodge’s fourth year of promoting this program. The event was to encourage children to sign up for the special library programs for children of all ages. In attendance were 164 children accompanied by 50 adults. Twenty volunteers assisted the children and provided an age-specific book for each child.

Details
Written by David Lee, PER 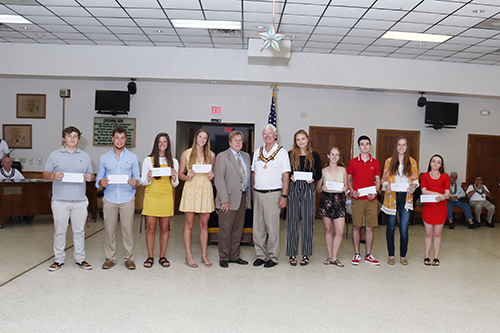 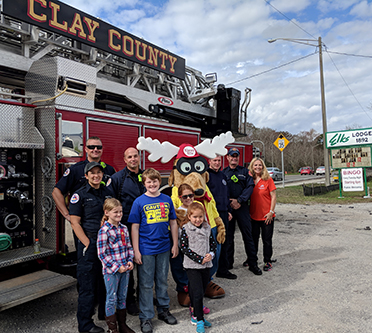 On Jan. 12, Green Cove Springs Elks Lodge #1892 used funds from an Elks National Foundation Promise Grant to host a kids' fair for the youth of the community. Participants spent a fun-filled afternoon learning the importance of fire safety, bike safety, exercise, nutrition, goal setting and drug awareness. They also had their pictures taken with Elroy the Elk. Twenty-four lodge members and volunteers, including Florida Elks Children’s Therapy Services therapist Janet Bryant and members of the Clay County Sheriff’s Office and Clay County Fire Department, were on hand to assist the children and their parents. Lunch was provided, and participants left with educational materials including Elks drug awareness education items and prizes to encourage active lifestyles. 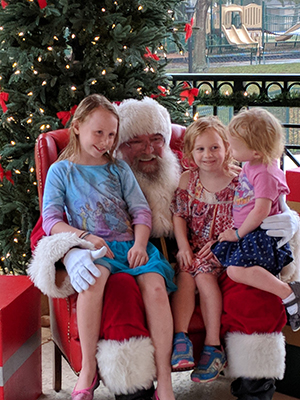 On Dec. 1, using funds from the Elks National Foundation Promise Grant and from the lodge's PER Association, Green Cove Springs Lodge continued their tradition of sponsoring Santa's Workshop. This event is held in connection with the city of Green Cove Springs’ annual Christmas parade. After visiting with Santa, children and their families are greeted by lodge members and volunteers who happily hand out gift bags packed age-appropriately for infants through teens.