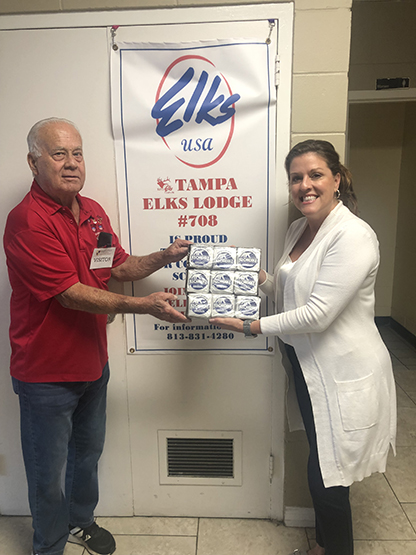 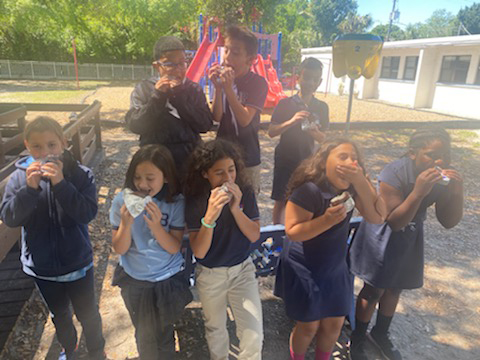 Though several schools, scout troops and other youth groups were solicited, Tampa Lodge only received Drug Awareness poster contest entries from BridgePrep K-8 Academy. Seventeen posters were submitted from two grades. In lieu of participation certificates, Tommy Moore, Lodge Drug Awareness Chair, decided to treat the students to ice cream. They were released from class to have their snack outside. In addition, the lodge donated $100 to the school, which will be applied to their Black History Month budget shortfall.

Pictured March 24 is Tommy Moore delivering the ice cream and donation to Christine Harris, principal and lodge member. The students are pictured March 25 enjoying their reward. 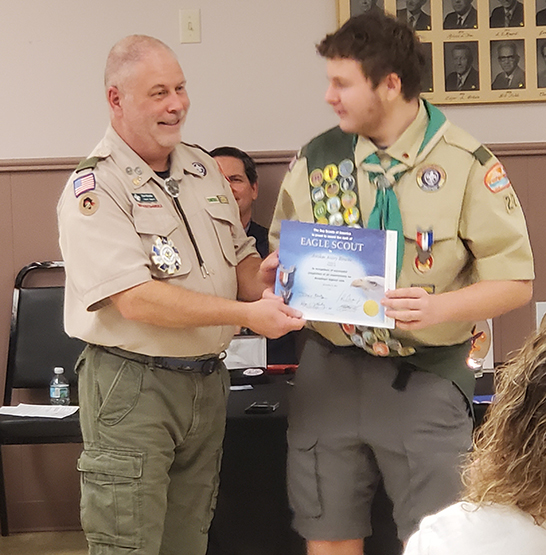 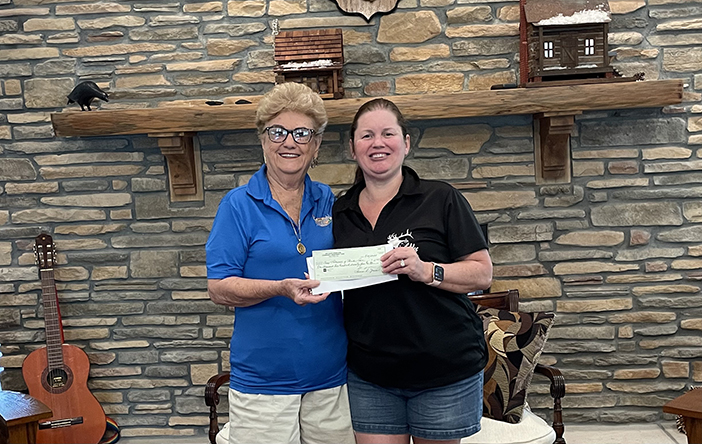 On March 23, Tampa Lodge donated the remaining $1,225 of its Elks National Foundation Beacon Grant to Camp Idlewild of Florida Inc. Part of these funds were applied to a water safety course. Because the camp has only been open a year, they have a lot of projects that still need funding, so the camp owner, Eileen Roach, indicated that the rest will be used to start a major item on their wish list — building a tepee near the entrance of the property. Camp Idlewild focuses on overnight camping for children with disabilities, particularly those on the autism spectrum. 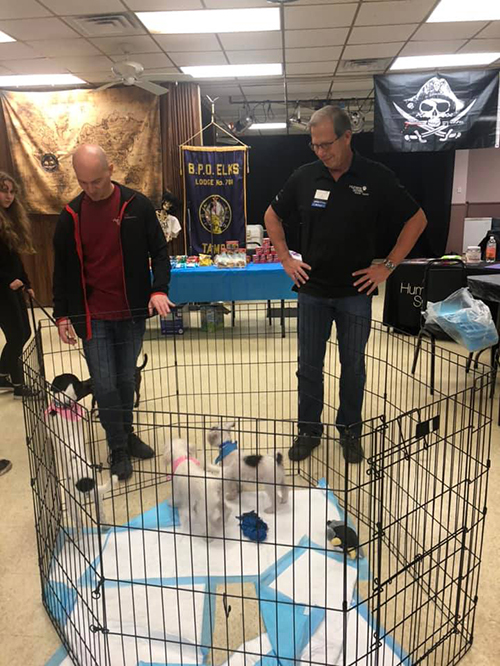 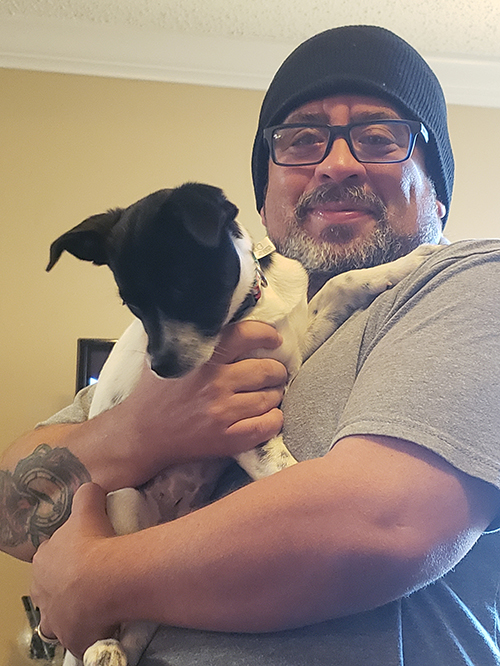 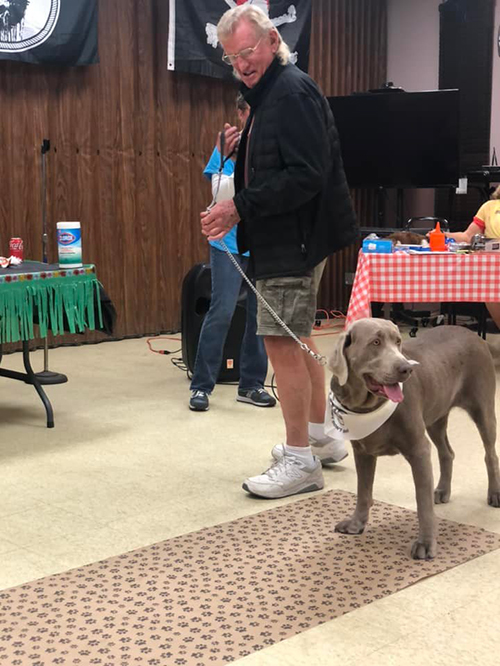 In conjunction with the Humane Society of Tampa Bay, Tampa Lodge held its first pet adoption event and pet show Feb. 5. They funded it using an Elks National Foundation Gratitude Grant. Elks and members of the community showed off their pets, and dogs and cats walked the runway to compete for prizes in various categories such as Fluffiest Pet, Friendliest Pet and Best Animal Trick. Every pet attendee was given an Elks “Adopt, Don’t Shop” bandana and treats, and refreshments were served to pet owners and volunteers. Three Tampa Humane Society handlers brought three dogs who were up for adoption and one of the handlers spoke about the services that the Humane Society provides and the importance of spaying and neutering pets. Member Mike Volpe put a hold on one of these dogs and the next morning, he took his dog to meet her to make sure they got along. When they did, he took Dottie home to join his family. The pet contests were interspersed with guest speakers and pet trivia. Gift cards were awarded for the pet contests and there was a prize table for the trivia winners. All remaining gifts and funds were donated to the Humane Society of Tampa Bay. Members also donated hundreds of pounds of dog and cat food and other supplies to the Humane Society. Approximately 35 people attended the event along with 11 dogs and two cats.

Pictured are a Humane Society representative with the adoptable dogs, Mike Volpe with his new dog, and member Richard Whizenhut and his silver Lab Jenny. 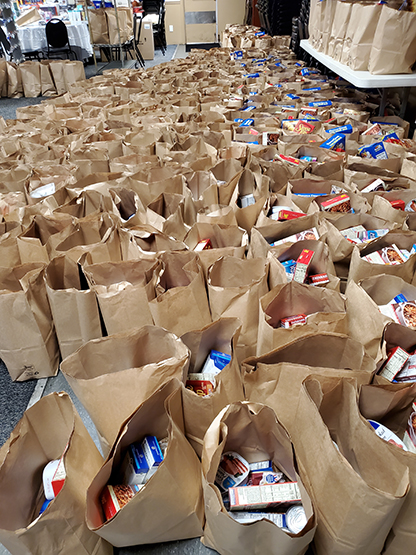 St. Petersburg Elks Lodge #1224 partnered with the lodge members, The Kind Mouse and Walgreens to collect enough food to make up 325 bags for local families in need and nine veterans’ homes, of which there were four veterans in each of the homes. Each bag contained a ham, yams, mashed potatoes, corn, green beans, sweet potatoes, stuffing, rice, cranberry sauce, cornbread mix, macaroni and cheese, pie-filling mix, pudding and milk, enough to feed a household of six. The food totaled 4,642 pounds and had a value of more than $9,950. Helping to put together all this food for distribution Dec. 17 were Scout Troop 209, 26 lodge members and eight members of The Kind Mouse. The Northside Baptist Church food pantry assisted with delivery.

Pictured are the filled bags ready for delivery. 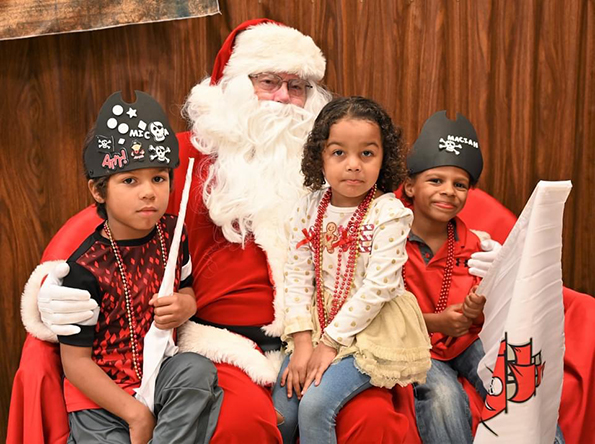 On Dec. 19, Tampa Lodge hosted a pirate-themed children’s Christmas party. Some funding came from the lodge charity account, the Walgreens toy collection and a $150 Publix donation, but most funding came from generous donations of lodge members. There were 108 children and 78 parents who registered to attend. Numerous member and nonmember volunteers made the party a success. Each table had a volunteer to assist the families in the crafts and games. There were pirate ships, pirate hats, a Captain Hook game and a cannonball toss game. Shelagh Gombarcik, PER and the Ladies of Elks hosted a treasure hunt game in which the children had to find Tampa Lodge on a map. There were lots of prizes given away and Melissa Bertoch, chaplain, kept the fun going as she let each table’s winners compete for a grand prize winner by age group. Santa (Paul DeLand, Exalted Ruler) was escorted in by pirates from the Krewe of Sir Francis Drake thanks to new member, Rodney Kayton. They tossed beads to the children while Santa made his way to his chair. Each child visited with Santa and received a gift from member Candy Venable, Santa’s trusted elf. Member Kim Van Walker took each child’s picture with Santa. All the children who came in pirate attire were given a new Buccaneers flag, which were donated by member Jason Brown. The Drug Awareness committee provided coloring books and bags to all the children and committee member Ray Hendricks announced the poster contest. During the event, parents were invited back to the Antler room to shop for at least four gifts for each of their children. They were invited to wrap, tag and bow the gifts with member Shannon Wheatley’s assistance before putting them in their vehicles and returning to the party. Table volunteers ensured everyone was still having fun while the parents were away. Dee Cisneros, PER; Tommy Moore, trustee; and Rita Smith, Leading Knight, made spaghetti, salad and garlic bread for everyone, and there were ice cream sandwiches for dessert.

New Port Richey Elks Share Food with those in Need

On Nov. 10, members of New Port Richey Elks Lodge #2284 packed and distributed food for schoolchildren in need and for a veterans’ recovery home. The lodge purchased the food with its Elks National Foundation Freedom Grant. 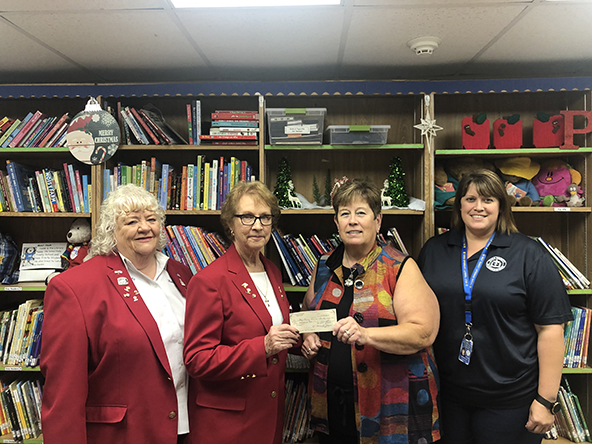 On Dec. 9, Tampa Lodge donated $1,000 from its charity funds to Holy Trinity Lutheran School in south Tampa, Florida, to purchase library books for the fourth and fifth grade students. Presenting the check are Rita Smith, Leading Knight, and Suzanne Moore, Lecturing Knight. Moore brought this need to the lodge’s attention as she is a teacher's assistant at the school. Accepting the check are Sue McColgan, librarian and art instructor, and Kelly Reilly, principal. 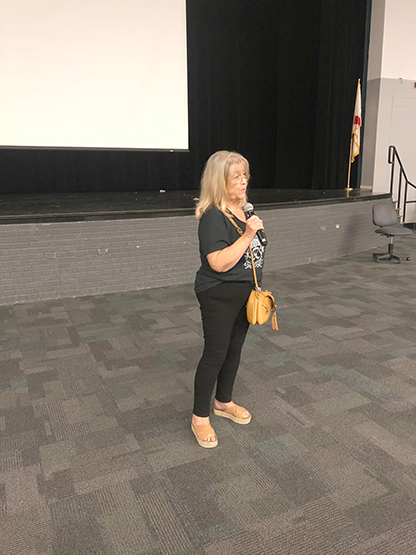 On Nov. 18, Tampa Lodge’s Club Chivalry sponsored an “on-campus” field trip in conjunction with the Great American Teach-In, previously known as Career Day. Every school in the district holds it on the same day and invites community members to discuss their careers with students. The club offered breakfast before students explored career opportunities by visiting booths in the gym. There were about 20 tables set up with various employees, including a barista, a lawyer, active-duty military, college recruiters, EMTs and more. Afterward, guests, mostly lodge members, spoke about their careers. Patty Volpe, Youth Activities Chair, discussed how she arrived at her career at CCS Medical, a diabetic supply company. Shelagh Gombarcik, PER talked about careers in the hospitality industry. Betty Orcutt, PLP told them about her route into nursing. Edie Hanley, Inner Guard, interested them in a career in the prison system, especially the possibility of early retirement. The group then had lunch followed by team-building activities. Pictured is Shelagh Gombarcik, PER. 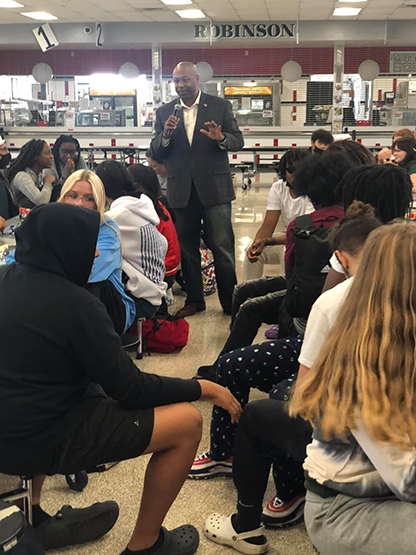 Tampa Lodge’s Elks National Foundation Impact Grant project, Club Chivalry, met Nov. 9; the guest speaker was lodge member Roshaun Gendrett, who was an educator in California and who is now running for school board. He spoke about what students need to succeed in school and he explained the role of the school board. He was well-received by the students. Club T-shirts were also given to the students at no charge to them. On Nov. 10, the club took a field trip to Kaiser University. 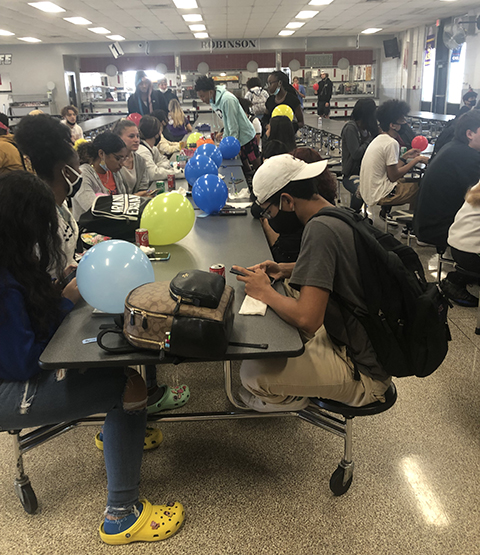 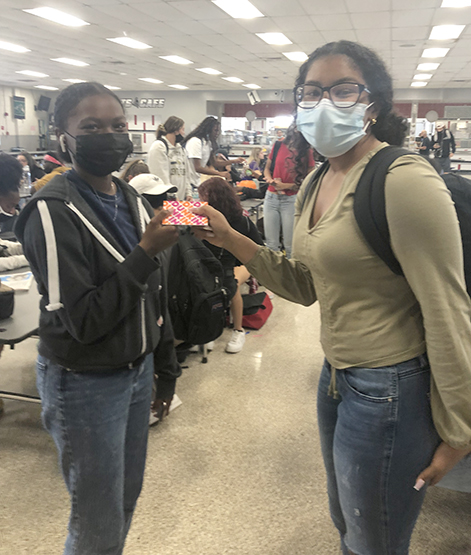 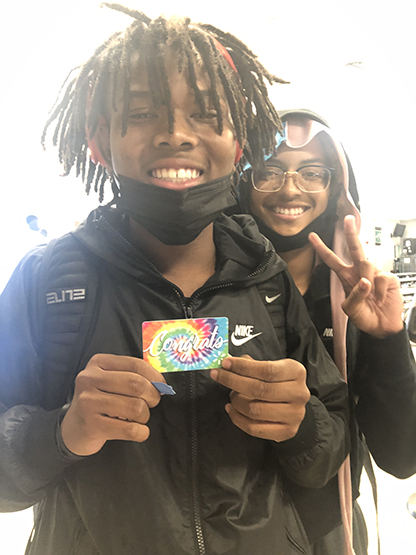 On Oct. 11, Tampa Lodge was welcomed back on the Robinson High School campus to assist with the lodge-sponsored Club Chivalry. There were 49 students in attendance despite a program rehearsal held at the same time. At the beginning of the meeting, students were called for refreshments by grade and they could sign up for their T-shirts. Then lodge member Rita Smith spoke about the Elks lodge and their history at Robinson and told the students about two great community service opportunities in the neighborhood. Club president, Andrea, then explained the rules of the team-building game, which involved popping balloons while wearing mittens (some participants pictured). 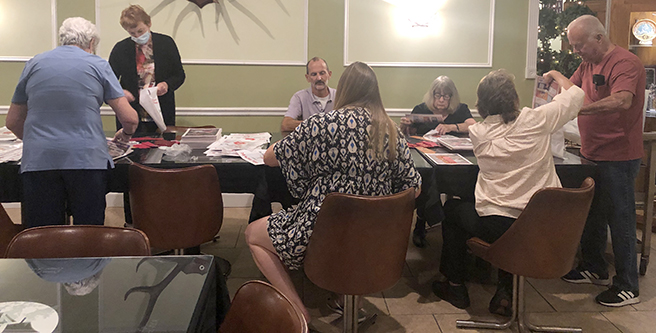 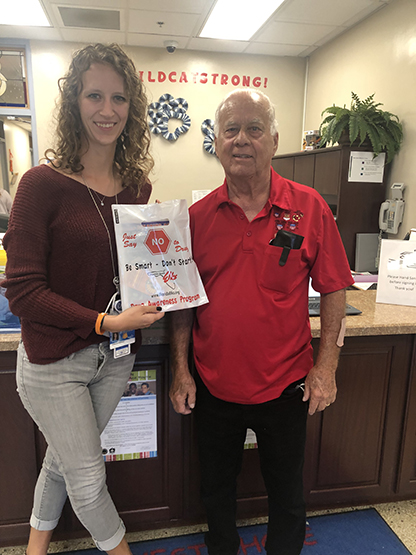 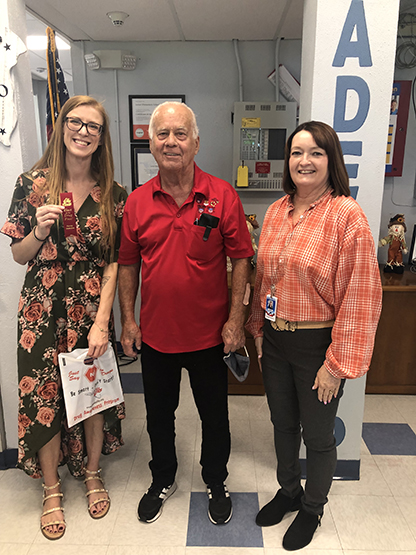 On Oct. 7, Tampa Lodge members sorted and stuffed drug awareness bags for the two elementary schools that agreed to distribute Elks Drug Awareness Program materials to their students. Drug Awareness Lodge Chair, Tommy Moore, delivered the supplies Oct. 18 to Westshore Elementary and Lanier Elementary. Both schools are Title 1 and were glad to have the supplies in advance of Red Ribbon Week.