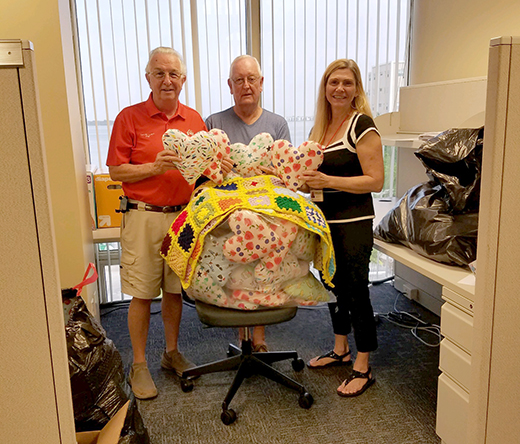 On Aug. 24, Fort Myers Lodge members David Lake, PSP and Roger Spencer, Exalted Ruler, presented 100 comfort pillows and five crocheted baby blankets to Michelle Leonard of the Children’s Network of Southwest Florida at their offices. This organization is the private, nonprofit lead agency that administers the child welfare system in five southwest Florida counties. Their mission is to work with the community to protect children and preserve families. Charity Works donated the pillows to the Florida State Elks Association to be distributed to children in need. The blankets were made and donated by Gail Mascari, a lodge member and a past President of the lodge’s Ladies of Elks organization. 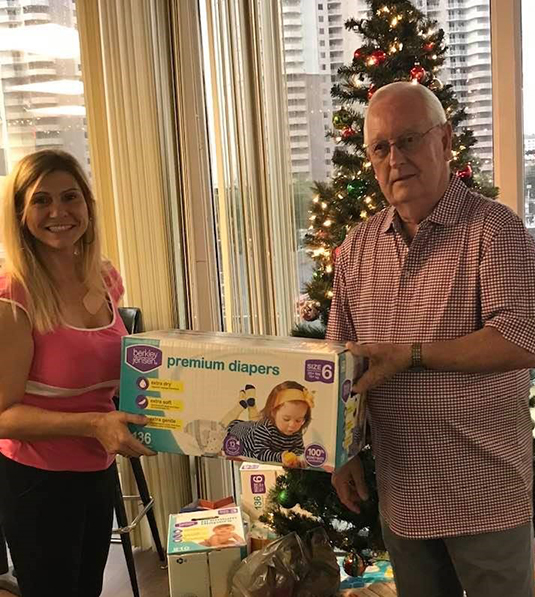 At the lodge Christmas-in-July dinner July 24, Fort Myers Elks Lodge #1288 presented a check for $2,000 from the Elks National Foundation Spotlight Grant along with $120 collected that night to the Children's Network of Southwest Florida. In addition to the monetary donations, during the month of July, members and guests placed packages of diapers and baby wipes under the Christmas tree in the lodge to present to the organization. The Children's Network is the private and nonprofit lead agency that administers the child welfare system in five southwest Florida counties. Pictured are Michelle Leonard, executive assistant to the CEO and human resources liaison, and Roger Spencer, Exalted Ruler, holding one of the many donated packages of diapers.

Details
Written by Ambrose Yelovich, PER 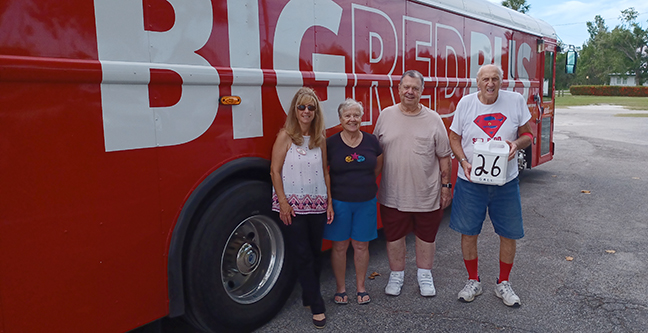 Punta Gorda Elks Lodge #2606 held a series of blood drives from February through June 10, which yielded 61 pints. This amount could save up to 183 lives, as one pint of blood saves three lives. The majority of donors were lodge members but there were some members of the community who donated as well, as Elks welcome anyone to participate. Pictured June 10 is Ambrose Yelovich, PER, chair of the lodge’s blood drives, holding a gallon jug with the number “25” on it representing the number of gallons he has donated. OneBlood has awarded him with the Super Donor status. The lodge holds a drive every 56 days. Pictured with Yelovich is Lori O’Brien, OneBlood account representative, presenting him with a decal and certificate of appreciation. 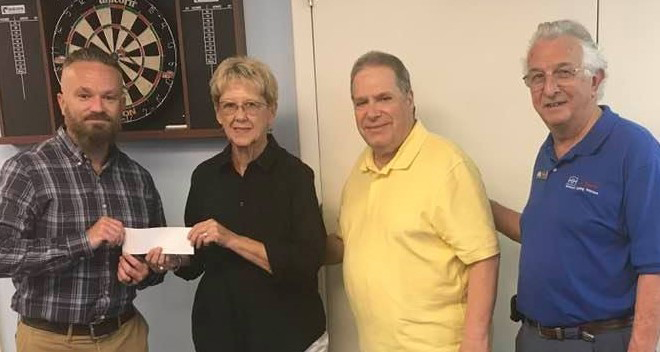 On May 12, Fort Myers Elks presented a check for $1,000 to the Salvation Army to assist them in their Fan Club project, which helps provide more than 300 box fans to prescreened seniors and families with low incomes as temperatures, electric bills and heat-related illnesses rise in southwest Florida. Eric Lane, campaign and partnership manager, accepts the check from Diane Hendrick, trustee; Bob Weinburg, Lecturing Knight; and David Lake, PSP, Esquire. 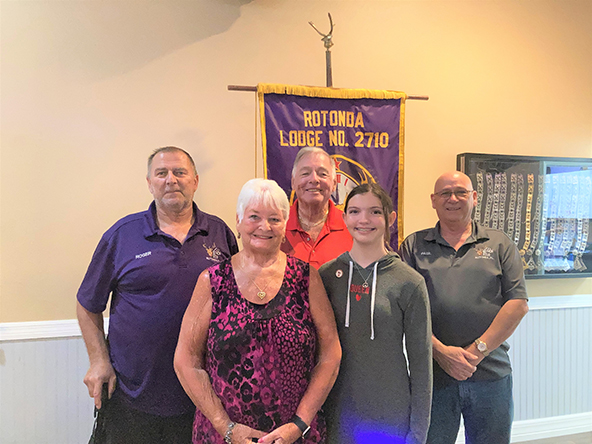 Rotonda Elks Lodge #2710 was the proud sponsor of eighth grader Mexi Font, Florida’s Division II first place winner in the annual Americanism essay contest. On May 7, Mexi’s parents, Holly Font and Spencer Hartvigsen, were invited to dinner at the lodge where Mexi was awarded a $1,500 check. She also attended the Florida Elks state convention in Orlando, Florida, May 29, and read her winning essay. Pictured with Mexi are Jean Humphreys, PER; Roger Redman, PER; Bob Humphreys, PER; and Paul Bernhardt, Exalted Ruler. 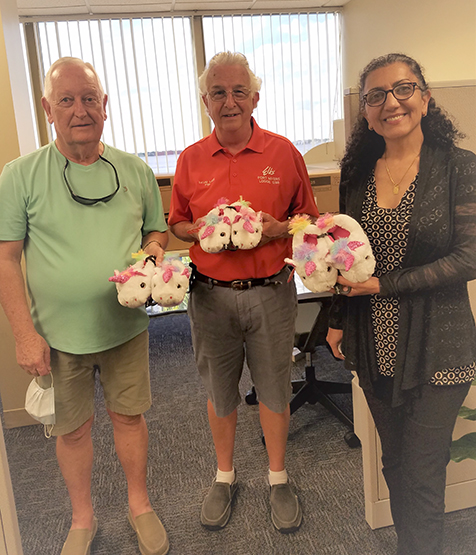 Roger Spencer, Exalted Ruler of Fort Myers Elks Lodge #1288, and David Lake, PSP present 120 pairs of children’s unicorn slippers Feb. 9 to Nadereh Salim, CEO of the Children’s Network of Southwest Florida. The Children’s Network of Southwest Florida is a private, nonprofit agency that administers the child welfare system in five southwest Florida counties. Its mission is to work with the community to protect children and preserve families. The slippers were donated to the Florida State Elks Association by the Dan-Dee Company to be distributed to children who are underprivileged or handicapped or who have special needs in Florida.

In December, Punta Gorda Lodge Elks Lodge #2606 donated to the St. Vincent de Paul food bank and the Jesus Loves You Ministry for those who are homeless using the Elks National Foundation Beacon Grant. On Dec 13, the lodge held a Christmas dinner and dance benefit for the Charlotte County Foster Children Christmas Program and raised $1,700. 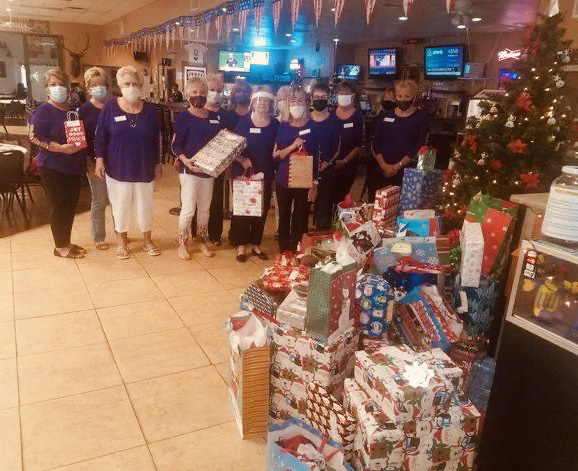 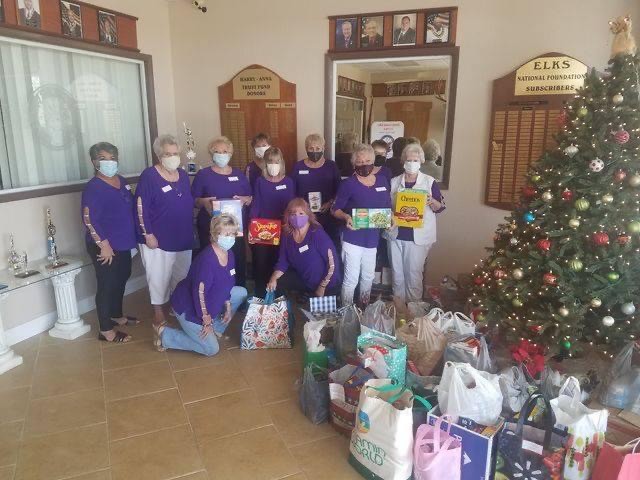 For many years, the Deep Creek Ladies of Elks have sponsored an Angel Tree for the children from the Big Brothers/Big Sisters of Charlotte County, Florida. This year, Melissa Nelson, Director, informed them that these children and their families had been adversely aﬀected by the pandemic and therefore each child was asking for only one gift and nonperishable food for their families. On Nov. 2, the Angel Tree was set up and decorated with pearl angels made by member Judi Anderson. On Nov. 4, tags with 115 children’s names and wishes were put on the tree. A mere two weeks later, the last tag was removed. By Dec. 9, all gifts had been returned and there was a plethora of nonperishable food. On Dec. 10, Big Brother/Big Sister volunteers came to pick everything up. On the first trip, a large SUV was packed full with gifts. They returned with the SUV and a pickup truck for the food. In addition to all this, Deep Creek Lodge donated 115 gift cards totaling $2,300 from Publix so the families could purchase perishable foods for their holiday dinner. 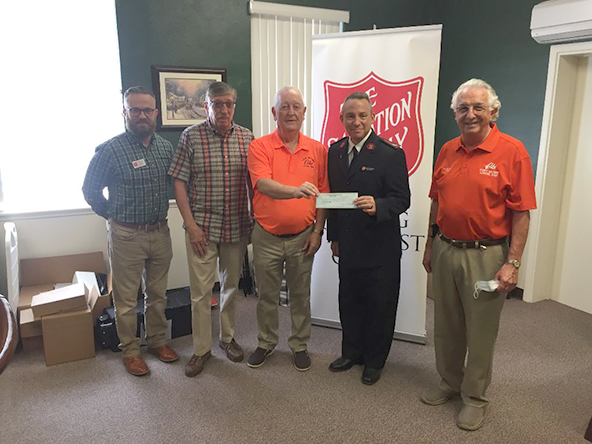 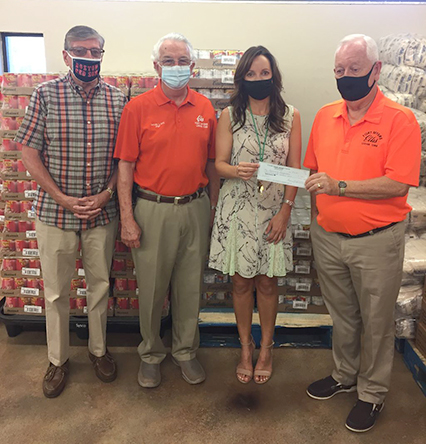 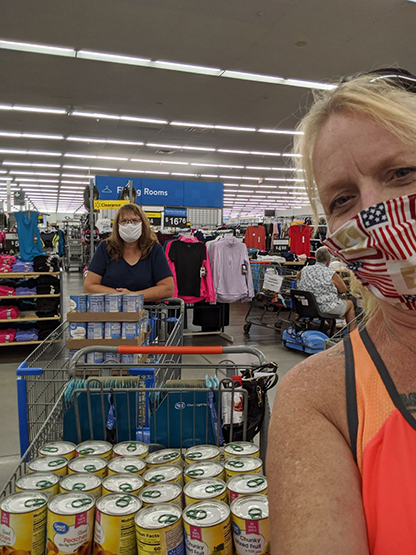 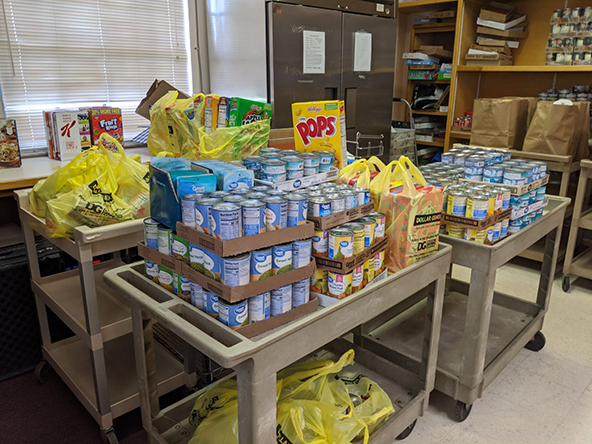 Rotonda Lodge will use $2,000 from its Elks National Foundation Beacon Grant ($1,000 from Elks National Foundation and $1,000 from a matching grant from the Florida State Elks Association) to buy $500 worth of food and personal hygiene items a month for September, October, November and December for the Englewood Helping Hand food pantry in Englewood, Florida. Volunteers in September were Jean Humphreys, PER; Vickie Annabelle-Nine and Debbie Sommers.

Using $1,305.31 of its $2,000 Gratitude Grant, Punta Gorda Elks Lodge #2606 donated food to the St. Vincent de Paul Food Bank in Punta Gorda, Florida, and the Jesus Loves You Ministry in Port Charlotte, Florida, a mobile outreach program for those experiencing homelessness. A large microwave was also delivered to the Jesus Loves You Ministry using $230 from the Gratitude Grant. In addition, the lodge donated $1,500 from its $3,500 Elks National Foundation Beacon Grant to St. Vincent de Paul for a new freezer. Food deliveries were made Aug. 31 and the microwave was delivered Sept. 3. 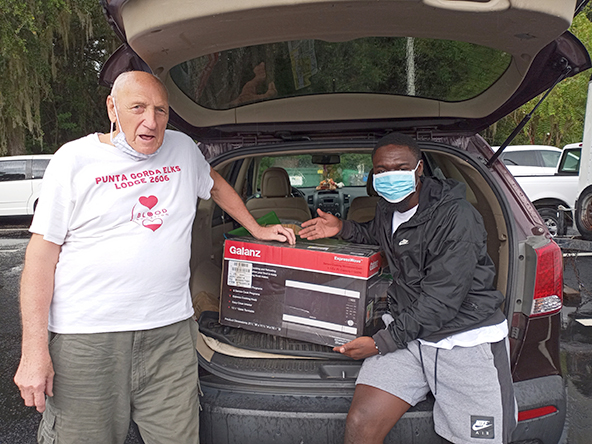