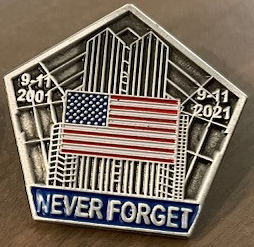 Crestview raised $500 for the Brotherhood Ride for their 22-day bicycle trip from Naples, Florida, to ground zero in New York, honoring Florida’s fallen first responders and all first responders who died from 9/11-related illnesses. The check was mailed to them Aug. 6. Donations were given by lodge veterans for first gentleman Joey Simonelli’s pin, and the lodge donated the rest. Simonelli “wanted to do a patriotic pin, as his father is a retired law enforcement officer, and to mark the 20th anniversary of 9/11. Plus, Joey loves the to support the Brotherhood Ride. As we travel, he passes out his pins and they are attached to a card with a QR code on it, so if people want to support the Brotherhood Ride, they can,” said State President, Suzi Simonelli.