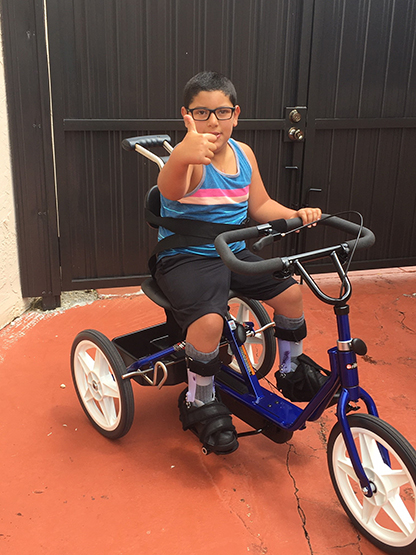 Working with Wheelchairs 4 Kids of Tarpon Springs, Florida, Miami Elks Lodge #948 donated $1,278so that 9-year-old Franklin could have an adaptive therapy tricycle. His mother wrote a letter to the organization asking for assistance, and the organization reached out to the lodge since they have a longstanding relationship; the lodge has sponsored more than 30 children in need of adaptive equipment. In the letter, Franklin’s mother explains that he “was born with a congenital heart defect (CHO) known as hypoplastic left heart syndrome (HLHS). He has had six open heart surgeries and 12 cardiac catheterizations to this date and a pacemaker implanted since 2012. In addition to his heart condition and as a consequence of lack of oxygen during multiple interventions, Franklin suffered brain damage and was diagnosed with spastic diplegia cerebral palsy….He presents a global developmental delay which prevents him from performing regular activities other children his age would. He takes daily medications and requires full assistance for ambulation, bathroom, feeding, etc. and specialized care for monitoring his condition. He receives therapy services (physical, occupational, speech and behavioral) at home several times a week. In the past, Franklin was able to use a standard kids’ tricycle to exercise his legs. Now, he outgrew the kids’ size and the next stage tricycles don't provide the additional safety that Franklin requires. I actually purchased the smallest adult tricycle I could afford and made some modifications but it is not safe for him….Unfortunately, insurance companies won't cover this device.”

According to Nina Shaw, Programs Team Leader for Wheelchairs 4 Kids, “Franklin is an average boy who is above average. He enjoys activities similar to other kids. His routine is to watch “Paw Patrol” after lunch and “Peppa Pig” before bedtime. The last thing Franklin does before falling asleep is reading a “Peppa Pig” book. The young boy listens to a variety of music that puts him into a relaxed mood. He likes getting fresh air and going to the park to watch people play baseball and basketball. Franklin is a sports fan, especially of soccer. He attends many games to support his cousin who plays the popular sport. Franklin is a huge fan of the former Real Madrid player, Cristiano Ronaldo. Franklin, however, is not defined by his interests. He is a good kid with an endless smile and a positive attitude.” Shaw also notes that the tricycle will be used “to improve his leg flexibility, strength and balance. The trike will also be another outlet for him to play outside.”

Because of the coronavirus pandemic, the organization is not doing presentations, so the tricycle was sent directly to his home from the manufacturer July 13 and he was riding it every day!