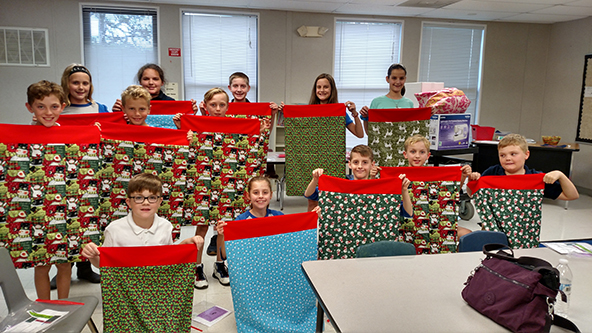 During the holiday season, Rotonda Elks Lodge #2710 partnered with the Rotonda Quilting Club to provide a sewing opportunity for kids. Twenty-five third, fourth and fifth graders learned to use sewing machines to make their own Christmas pillowcase at Vineland Elementary School in Rotonda West, Fla. Debbie Sommers, Lodge Secretary, describes the project. “I felt a sewing project would benefit children and engage Elks and their friends in a new kind of project. I originally wrote the project last year using our (Elks National Foundation) Promise Grant. We purchased eight new sewing machines and lots of Christmas fabric with the grant funds. To support reading and following directions, I created illustrated pictorial direction sheets so the children could follow each step and be successful. It was a huge success last year at Vineland Elementary. We had fabric left over from last year so I contacted the Vineland Elementary after-school coordinator again and asked if they would be interested in doing the project again. They were excited for an opportunity for the third to fifth graders to learn a life skill. We set up dates and times at the school and I put out a request through the lodge for sewers via Constant Contact and then worked with the gals interested in sewing with the students. Everyone enjoyed the experience and next year we have expanded to include an additional elementary school.”