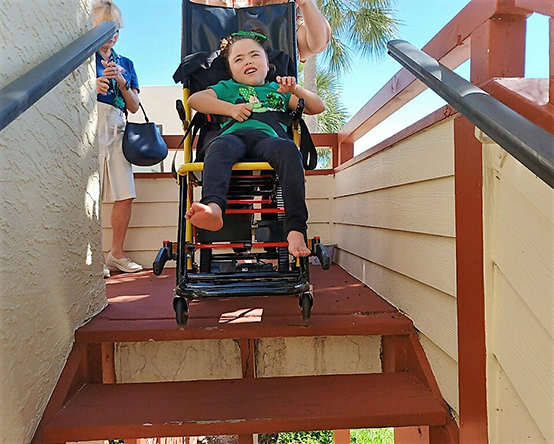 Earlier this year after receiving an email from a neighbor (whose parents were Elks) about a family in need, Sarasota South Elks Lodge #2495 got involved. They contacted the family and found out that 6-year-old Ava Zinmeister was born with a severe case of cerebral palsy caused by Kleefstra syndrome. Due to Ava’s condition, her mother, Toby, had to carry her up and down outside flights of stairs multiple times a day to transport her to therapies, doctor appointments and school. To make matters worse, Toby struggles with arthritis. It was obvious that Ava needed a lift. The lodge led a drive to raise money for a battery-operated chair lift and raised enough money in one night to pay for the chair. The lodge also informed the family about Florida Elks Children’s Therapy Services. Toby said they had tried so many organizations for donations but were always told the money ran out. “The Elks stood up when no one else would; we’re so appreciative. I’m thankful to the Elks beyond words,” said Toby.

Shown in the picture is Ava in her chair with the lift wheels.