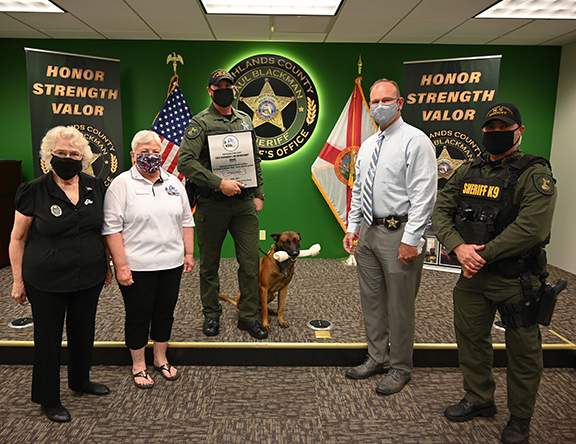 Deputy Ben Jones and K-9 Gentry were honored Dec. 21 at the Highlands County Sheriff's Office with the first responder-law enforcement award by Sebring Lodge. They were honored for their record of good work, particularly their role in the seizure of 554 grams of heroin, 450 grams of cocaine, 99.6 grams of fentanyl and more than 1,000 illegal prescription pills during a traffic stop. The total seizure was worth $120,000 on the street. Pictured are Judy Hanson, PER; Wainetta Holmes, Exalted Ruler; Deputy Jones and Gentry; Sheriff Paul Blackman; and K-9 Unit Sgt. Scott Williams. His mother, sister and two brothers attended as well.