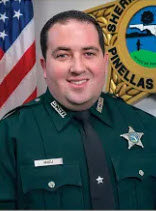 St. Petersburg Lodge volunteers led by Todd Dourm, Penny Rase, Debbie Rase and Karen Purser raised $3,568 to donate to the family of fallen Pinellas County Deputy Michael Magli. Deputy Magli lost his life in the line of duty Feb. 17 after being struck by a fleeing driver. He is survived by his wife, Stephanie, and two young daughters. He was born in Ozone Park, New York, and came to the Tampa Bay area in 1994. Initially hired as a part-time criminal justice specialist, Deputy Magli transferred to a deputy recruit position and was assigned to the Patrol Operations Bureau in 2014. He served eight years with the Pinellas County Sheriff's Office. The donation was presented to the Magli family March 16 at a fundraiser held by the Pinellas County Sheriff’s Department at the Belleair Pelican Golf Club.